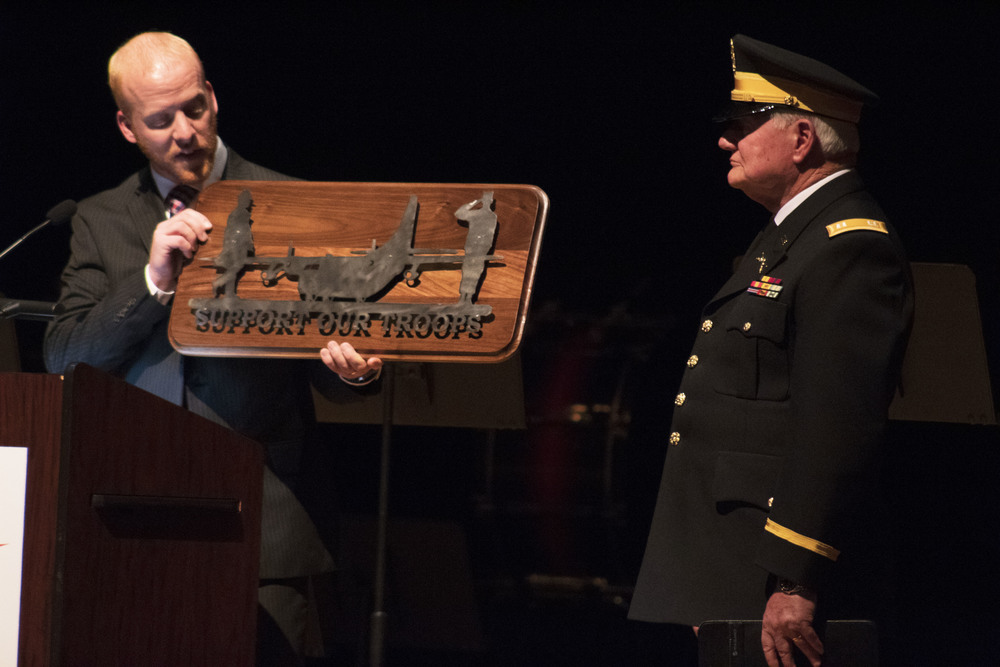 “Freedom is not free, the cost is extremely high,” Ken Kitchen, a retired Marine and Vietnam veteran, reminded students and members of the community attending the annual Veterans Day assembly at Alliance High School on Monday, Nov. 12.

The high school concert choir and band opened with “Thank You, Soldiers” with a solo by Sydney VanDerkar.

Joe Beichler, a history and government teacher who organized the event, gave the history of Veterans Day, originally called Armistice Day, marking the end of World War I.

Beichler presented Kitchen with a plaque created by students in Steve Fuson’s welding classes. The plaque shows silhouettes of soldiers with the caption: Support Our Troops.

In a uniform adorned with medals and decorations he’d earned in 24 years of service, Kitchen recounted details of his life in the military, especially his time in Vietnam. Kitchen joined the Marines at age 17 and later served in the National Guard and Army Reserves. He worked as a Wooster police officer after retiring from the military.

He recalled some of the horrors of war, such as when he lost comrades in an ambush. Kitchen said he, like many veterans, woke up nights, soaked in sweat, reliving those horrors.

But there were also touching moments, like the photo of him sharing his food with some Vietnamese children. American soldiers routinely shared food and supplies and provided medical treatment and aid to the Vietnamese, he said.

Kitchen also spoke about the Founding Fathers and those who signed the Declaration of Independence. He urged the audience to study that history, and how soldiers through the decades sacrifice their own ambitions to keep the country free.

“We must do everything in our power” to keep that freedom, he said.