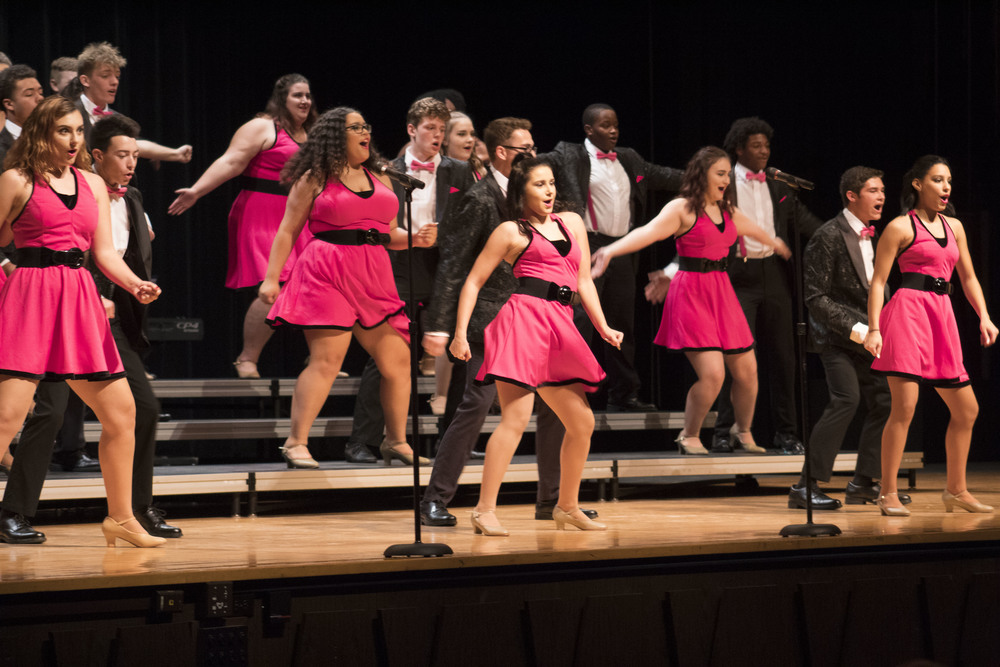 The AHS Jetsetters kicked off their 2018 competition season with a send-off show on Nov. 1 and participated in the Ada High School competition Nov. 5.

The send-off concert on Thursday  gave the selective show choir a chance to perfect their skills for their first competition in Ada. They were also able to perform for friends, teachers, and family who may not be able to travel to the competition.

This year brings some new additions for the Jetsetters, including a backup band and stage crew to enhance their performances.

The 32 singer/dancers, nine band members, and eight stage crew who traveled to Ada performed in the morning and qualified for finals in the evening.

The Jetsetters competed against eight other schools, two of which were also in their Class B division. They took home the first runner up award in Class B and fifth runner up overall after the evening performances. Junior DeSean Hollins was named Outstanding Performer for the competition.

Carrie Chunat, AHS choir director, gave the audience a brief summary of how competitions work, along with describing some of the awards that the Jetsetters compete for every year. In past years, they’ve brought home accolades such as Best Vocals, Best Costumes, Best Choreography, People’s Choice Award, and the Outstanding Performer Award from competitions with schools from many states.

This year, the Jetsetters’ theme is “Feelin’ It.”  The brightly-clad ensemble rushed onto the stage in pink dresses and black suits for their energetic show. They began with “Good Feeling,” with Destini Howard and Jocelyn Austin rapping in the middle of the song. They then transitioned to the ballad “Make You Feel My Love,” with soloists Kiera Hairston, Destini Howard and DeSean Hollins, with beatboxing by Karleigh McCracken.

Next, Nick Deack led the boys through “The Way You Make Me Feel.” The girls re-appeared in retro green, silver, and black dresses with high black boots to sing “I Feel The Earth Move.” The Jetsetters closed out their sensational show with “Feel It Still.”

According to several members, the Jetsetters are excited about their upcoming season.

“This was my last first performance,” said Destini Howard, a senior and soloist. “I couldn’t have imagined being on the stage with a better group of kids.”

Their new costumes for this competition season have drawn a lot of attention for their flashy looks, a staple of the Jetsetters. They were designed by Randall S. Lanoue, who also serves as the group’s choreographer.

DeSean Hollins, the junior soloist who was Outstanding Performer at Ada, said: “Our costumes are really great this year. The boots and the dresses look amazing, and it’s a great flashback to a retro look.”

For those who aren’t interested in singing and dancing, but still want to enjoy the camaraderie of the Jetsetters, the new stage crew and band offer spots to enhance their sound and keep the show running smoothly. There are even awards for the best band.

The addition of a stage crew and band are not the only changes happening with the Jetsetters this year. Alliance will host the inaugural “Royal Aviation” show choir competition at the high school on Jan. 12.

The Jetsetters will also compete at Medina High on Feb. 16, Twinsburg High on Feb. 24, and Norwood High on March 6.