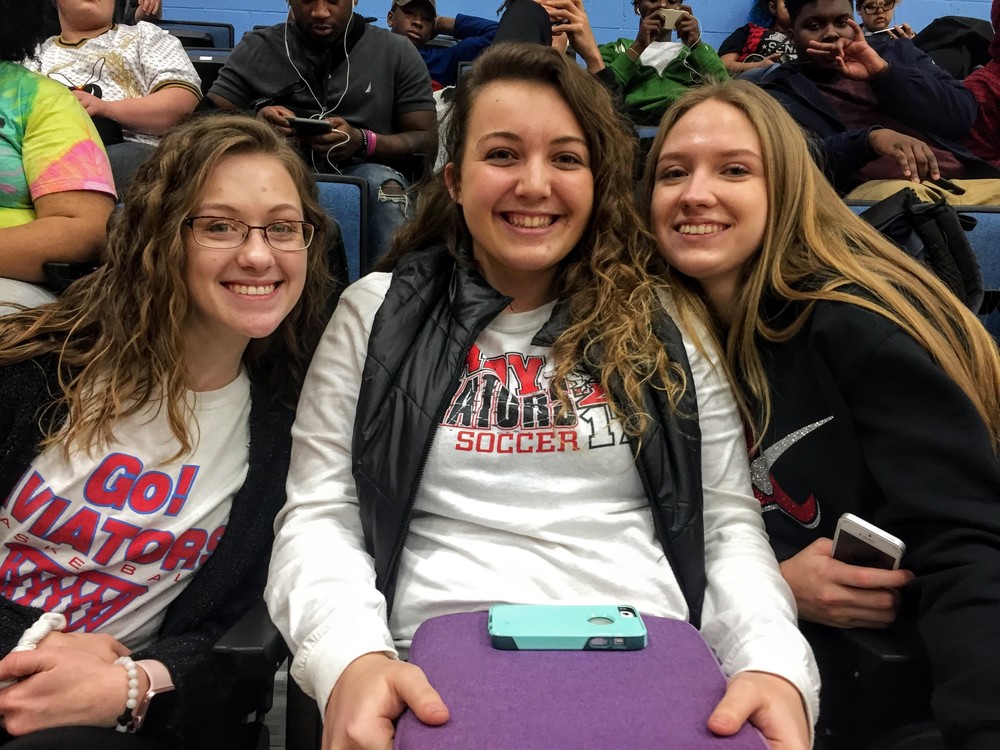 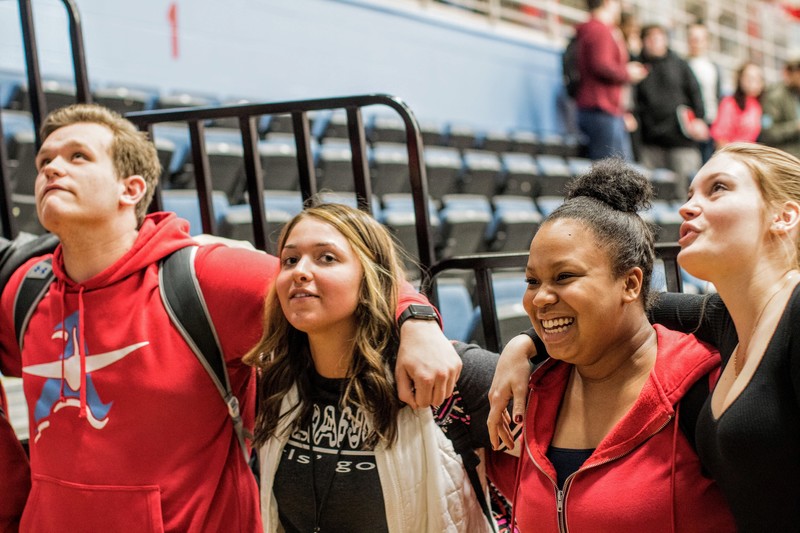 The Winter Homecoming dance was a huge success with its throwback theme of  “Hip Hop Hooray.”

But the dance wasn’t the only exciting event that week. A Spirit Week full of creativity, and a Pep Rally full of fun, took place in preparation.

“Spirit week is a way for everyone in the student body to come together and do something as a whole school. It’s cool to see how creative people can get,” explained senior Howard Frazier.

Evelyn Courtwright, a freshman, participated several days during spirit week with her friends. On mismatch day, she said: “I had fun picking out my outfit. I even wore mismatched shoes!”

Unikka Threats, also a freshman, weighed in on her favorite aspect of spirit week: “My favorite theme was character day, because it was fun to express myself through my outfit.”

Like Ms. Audrey DeMonte, some staff members decided to flaunt red bandanas and blue shirts as they dressed up as Rosie the Riveter.

Mrs. Marilyn Jackson, like many others, wore lots of red for Valentine’s Day.

“I think it’s cool that Valentine’s Day was in the middle of Spirit Week, because I got to witness so much kindness being spread throughout the school,” she commented.

Spirit Week came to a close with a pep rally on Friday afternoon, which was organized by the AHS Culture Club. Before the games began, members of the Winter Formal court were introduced, and the AHS competition cheer team put on a great performance. Austin Lilly and Diamonique Colbert were crowned king and queen before the varsity basketball game later that evening.

The Culture Club had arranged four games for the rally, and each grade came away with one win. The freshman class won “Makeup Mania” which consisted of a blindfolded student applying makeup to their classmate, while another student gave instructions.

“It was difficult because I couldn’t see anything, and my partner wasn’t great at giving directions. I had a lot of fun though,”  said Martin.

The senior class destroyed the competition in “Frozen T-Shirt,” which required a team of two to unfold a shirt that had been put in a freezer, and put it on.

“I cut my knuckle trying to punch through a frozen sleeve,” said senior Kylee Young.

Perhaps the most challenging game was “Ball Roll.” Keeping their hands behind their backs, teams of three had to blow plastic balls down the table and into the cup of the corresponding color.

Junior Jerek Leonard was on the winning team. “It was a tough test of both skill and strategy,” he said.

As always, the pep rally ended with all students coming together to sing the Alma Mater, as the Pep Band provided the music. 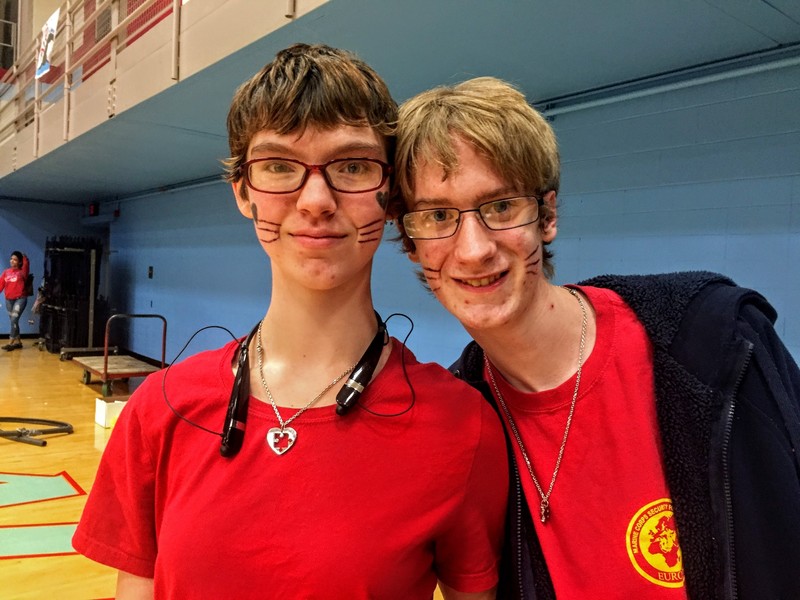 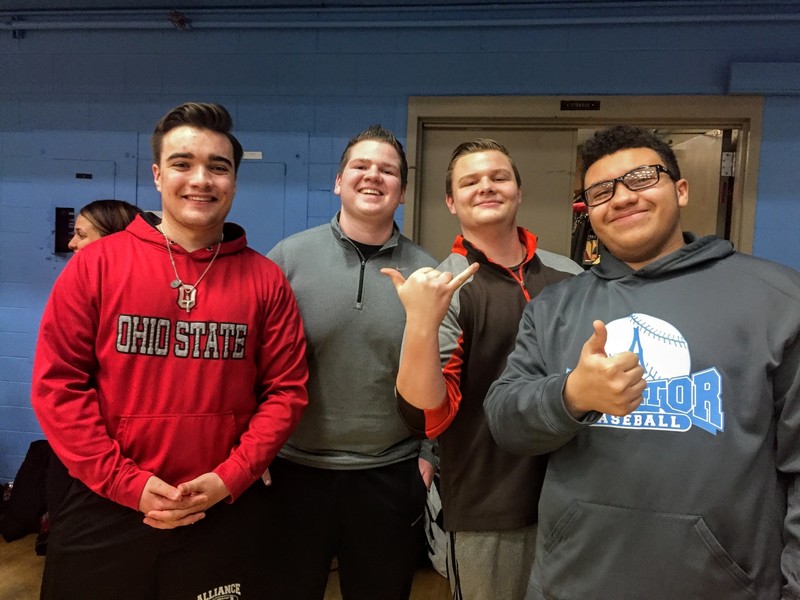 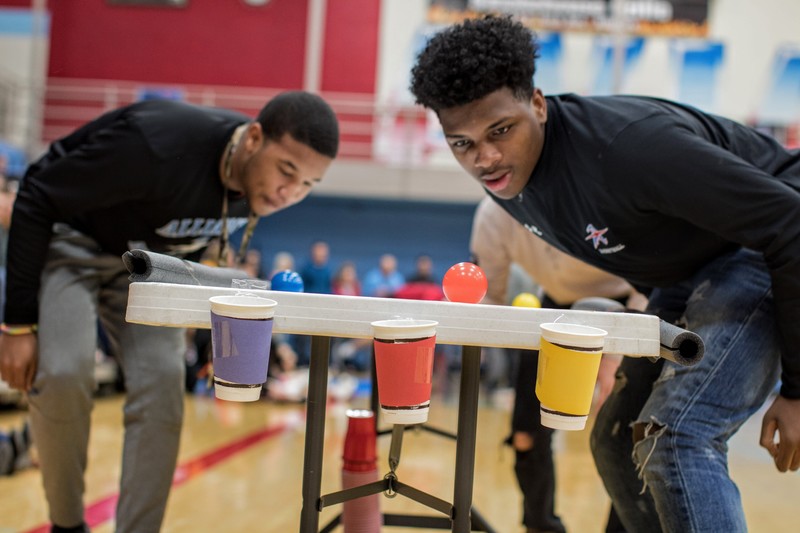 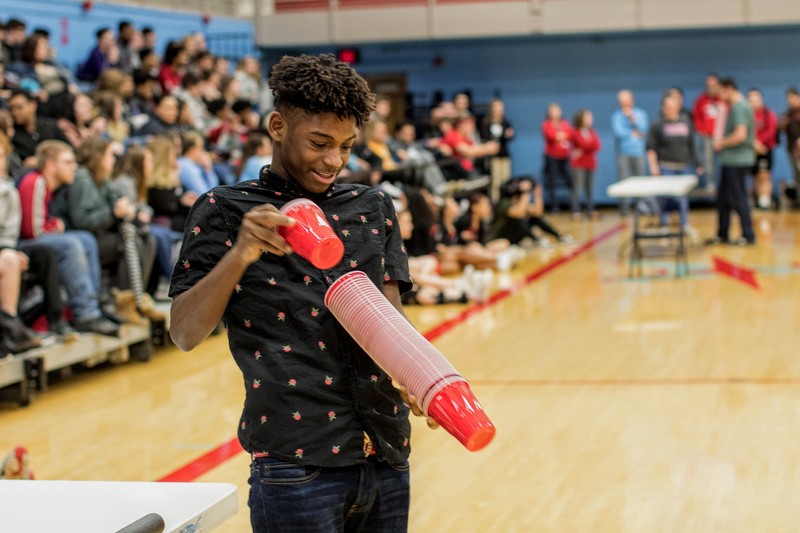 Khoree Mitchell competes for the freshmen in the cup stacking event