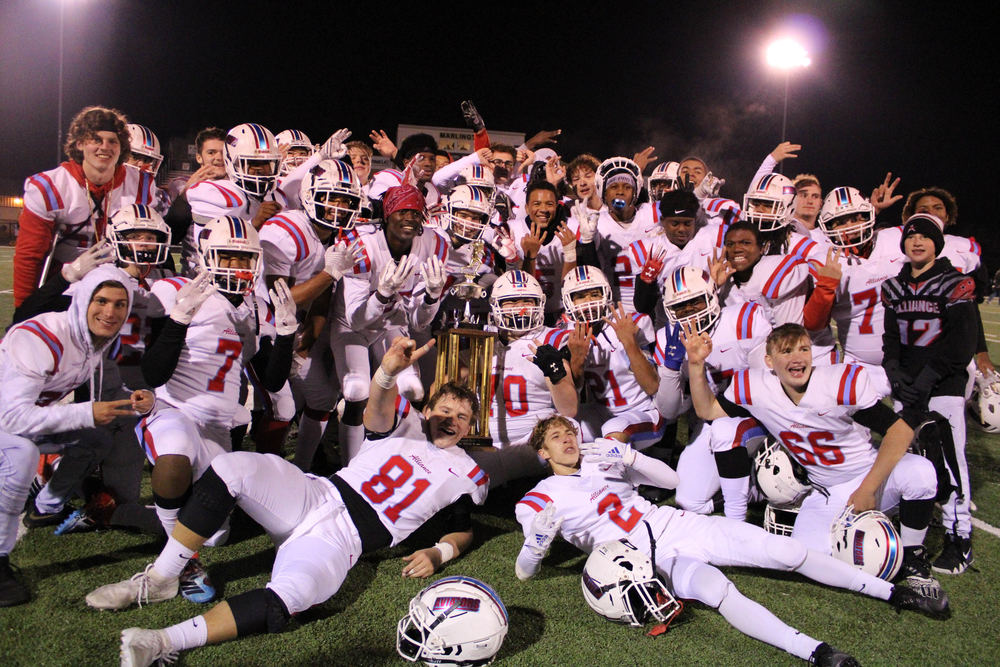 On Friday, Nov. 1, the Alliance Aviators and the Marlington Dukes faced off in the EBC conference championship for the third consecutive year in a row. Both teams came in with a record of 6-3 and on winning streaks.

This rivalry game was selected as the High School Football Game Of The Week for the Cleveland Browns. The winning team would receive $2,500 for the athletic program and they would award the MVP of the game.

The Aviators got off to a very quick start scoring on their first drive and taking a 7-0 lead. They kept this momentum all throughout the game as the offense and defense were both playing great. They had a 27-14 lead at the half as they would receive the second half kick to start things.

Marlington quickly scored two touchdowns to make it a one score game, it was 41-35. The Marlington defense had the Aviators on third down and eight with 2:04 to go in the fourth. If Marlington stopped them they would give the ball back to their offense and if the Aviators converted or scored that would put the game away.

The Aviators were at the Marlington 47 yard line as Braidyn Hartsoe took the snap, dropped back, looked right, looked downfield and threw a bullet across the middle of the field to Jeff Talbert who made the catch, broke a tackle and took it to the endzone for a touchdown. The Aviators increased their lead to 13 as they looked to finish off the Dukes.

They did so as J’Dynn Seals intercepted the Marlington quarterback with 49 seconds to go. The Aviators took a knee and that was it. The Aviators were crowned EBC champs for the third consecutive year in a row.

Hartsoe, the quarterback, went 27/35 for 342 yards and scored five touchdowns with four being thrown and one rushing. Salah Edwards had two receiving touchdowns, Brandon Alexander and Talbert had one receiving touchdown, and Nick Deack scored 12 points for the Aviators going 6/6 on extra points and 2/2 in field goals.

At the end of the game, Hartsoe was announced the MVP by the Browns representatives He was selected by the Cleveland Browns for his outstanding game as QB. When asked about winning the EBC again and being named MVP, he said “I love it, and I loved how we played on both sides of the ball for the first three quarters, but towards the end of the fourth quarter we fell apart. But other than that, the whole game was greatly played by us and winning the MVP, I mean wow I love how I got the MVP of the game, which is an honor to me and it makes me smile. It’s something I’ll remember forever since it’s the most important game of the season to me and probably the whole team.”

“I’m happy with the way I played and how the team played all together,” Andrew Datz said after the game. “Braidyn went off and so did our offense. It was one heck of a game.”

“I’m so proud of my boys in tonight’s victory,” Coach Seth Whiting said. “It was intense from the beginning to the end of the fourth and my boys fought hard. The offense played amazing and I love how our defense played other than the end of the 4th but we were able to finish off the game to get the W, and Braidyn was having one heck of a game and I’m happy for him.”

With the Aviators win, they clinched a playoff berth in the OHSAA State Playoffs for the third straight year and will face Hoban in the first round. Alliance finished with a record of 7-3 and ended on a five game winning streak. Hoban has been undefeated all year and they look to win their fifth consecutive state title.